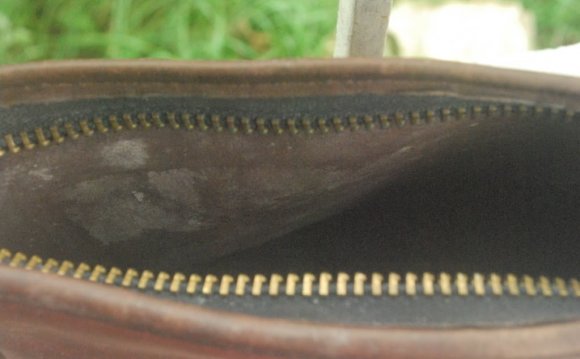 The hardware was usually square or rectangle, and always made of brass until the late 90s. The closures were either magnetic, kiss lock, knobs, turn lock (the most common with flap purses), drawstring, or zipper. The aesthetic buckles over a magnetic closure wasn't introduced until later. Either way, over time the brass darkens slightly with tarnish. It is common to see rectangle brass logo zipper pulls on Sonoma bags, rather than the leather pull.

Most vintage Coach bags would have a raw leather interior with no lining. An exception would be the Sonoma, Sheridans and very early special edition Bonnie Cashin bags. The Sonoma sateen stripped lining was usually found in black, purple or dark navy blue.

The early Cashin bags that had a lining would have the Legacy stripes, although the colors were slightly different than the Legacy stripes today, and of course the fabric back then wasn't sateen, rather a cotton/linen/polyester type material.

Vintage Sheridan bags also would have a linen interior that is very sturdy. These bags would normally have a creed patch with no serial number and commonly made in Italy.

The inside bottom on vintage Coach was usually made of one piece of leather that continued from the sides, but reinforced with piping or heavy stitching around the edges. Some bottoms would have a solid or textured leather flap made of the same texture and color of leather as the outside. Briefcases, totes, or satchels many times had no piping, but rather a leather flap only.

It's also very common to see a seam go through the middle rather than a reinforced flap.

This is where you can see the difference in the fakes and real Coach bags. Fake bags are commonly seen having no bottom flap on the bottom inside of the bag with seams going from the top of the bag through to the bottom. If it does have a patch, it usually lifts or has stitching all over it. Real Coach interiors would have seams, but would not be visible on the bottom of the bag as the leather patch would be placed over them. Some fakes don't bother to do this and it looks awful when compared.

Some rare vintage bags had a Nubuc interior such as with some of the doctor's bags, although very rarely found in good condition.

There will usually be one inside pocket flap made entirely of leather and it either had no closure or a metal loop chain zip closure. The inside pocket would normally hang freely on earlier Coach versus being stitched into the side with a zipper. On some vintage bags there would be two pockets, one having the creed. Some satchels or business totes would also have different compartments for pens etc. Not all vintage purses had an inside pocket however.

Fake bags will also have an interior pocket, but many times the leather is a different texture or too shiny compared to the outside.